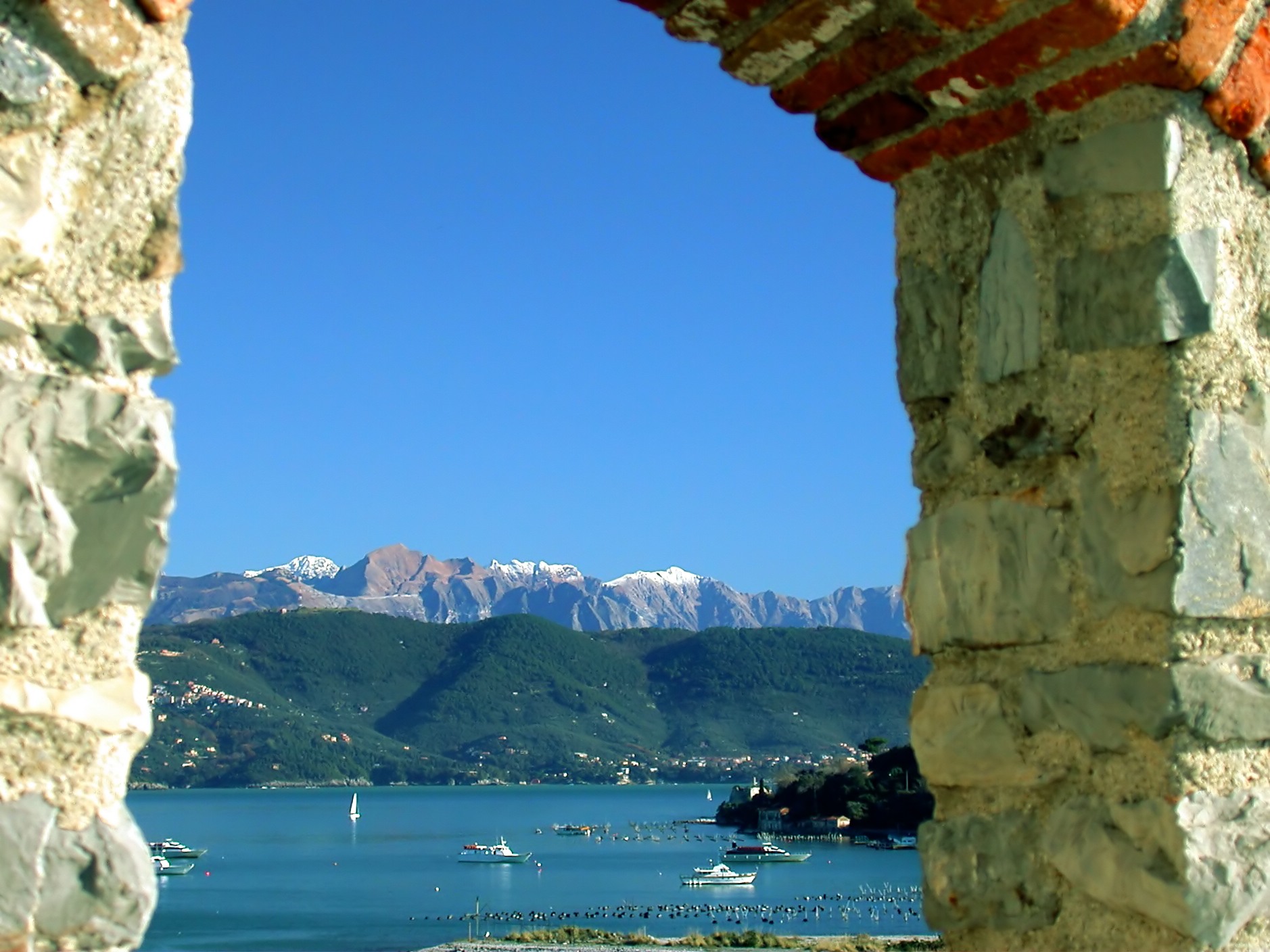 The Gulf of La Spezia

This  is a wide and deep bay on the coast of the Ligurian Sea, also known as the “Gulf of Poets” where in its landscape there are typical borghi, churches and medieval castles on the sea, sandy beaches and pastel-colored houses and a  land loved and described by artists and poets such as Byron and Shelley. The Gulf of the Poets goes from Portovenere to Lerici, two marvelous seaside villages of the Riviera di Levante.

One of the pearls of the Gulf of Poets is the beautiful Portovenere, which has always been loved by poets, writers and painters from all over the world and it is UNESCO heritage with the three islands of the archipelago (Palmaria, Tino and Tinetto). In this wonderful location there are a lot of things to see and to photograph: the Castle, the church of San Lorenzo, the church of San Pietro, the Grotta di Byron and the Palmaria, the only island inhabited in Liguria and a nature reserve crossed by paths and tourist routes.

Lerici is situated in the eastern part of the Gulf of La Spezia, near the estuary of the river Magra. This charming village still shows its original medieval structure, with the characteristic houses aligned along the narrow carruggi (small lanes). Here there are interesting places to visit such as the 13th century castle, the geo-paleontological museum, la torre di San Rocco, the parish church of San Francesco d'Assisi, Palazzo Doria, an ancient medieval hospital dedicated to Saints Peter and Paul and the relaxing walk along the Vassallo promenade.
Vista del castello di Lerici 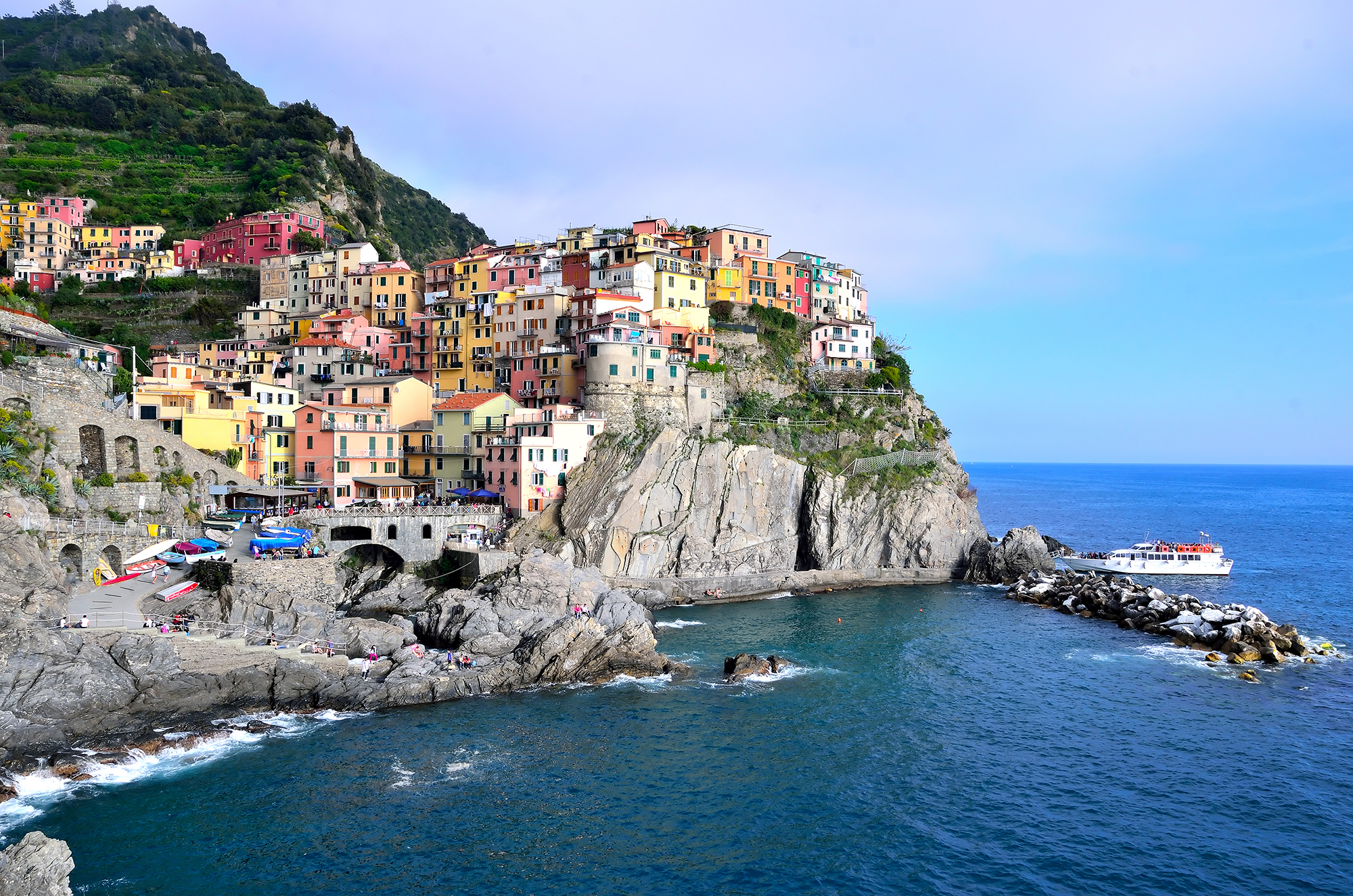 The Cinque Terre are five ancient fishing villages (Riomaggiore, Manarola, Corniglia, Vernazza and Monterosso) set along the indented Italian coastline. Each of these villages is characterized by colorful houses and vineyards clinging to the steep terraces built on the coast. Spurs of stone overlooking the sea, tiny coves, bays, ravines, beaches between the rocks are the typical features of this area; it is a unique landscape in the world with crystal clear sea. The Cinque Terre are not just nature, sun and beaches; it is possible to visit Marian shrines, connected by paths among unspoilt nature, the remains of castles and walled fortifications erected to counter the Saracen threat and the churches in the typical gothic-ligurian style. The Cinque Terre are National Park and since 1997 a UNESCO World Heritage Site. The blue path, which joins the five seaside villages, is the most famous and evocative path of the Cinque Terre. In some places the path turns out to be a real mule track that winds its way along the seafront, giving fabulous views. The most famous of the paths is the “Via dell'Amore”, a pedestrian promenade carved into the rock and open to the sea.

The Islands of Capraia and Gorgogna are part of the National Park of the Tuscan Archipelago, an unspoilt area of sun baked cliffs and exotic vegetation plunged into the blue Mediterranean Sea.

Capraia counts only a handful of inhabitants dwelling in the tiny village built around the harbour. The rest of the island, like the even wilder Isle of Gorgogna, is a wildness of cliffs plummeting into the sea, caves and inlets; the landscape is peppered with extinct craters and the occasional abandoned watch towers.
Arcipelago Toscano

The greater portion of the Promontory of Portofino, including the surrounding coastline and seabed, have been turned into a Natural Park , which is one of the most important in the upper Tyrrhenian Sea.
The ancient fishing village of Portofino is stunningly situated at the western tip of the Golfo del Tigullio while the ancient Benedictine abbey of San Fruttuoso is set in a small bay and it is famous all over the world for its “Christ of the Deep' a statue resting on the seabed 15 metres below the surface.
Portofino

The coastline between Moneglia and Levanto is a patchwork of unspoilt headlands and tiny inlets with crystal clear waters. The ancient, sea-faring villages of Moneglia, Deiva Marina, Framura, Bonassola and especially Levanto are set among multicoloured rocks and the town architecture dates back to the Middle Ages if not earlier. 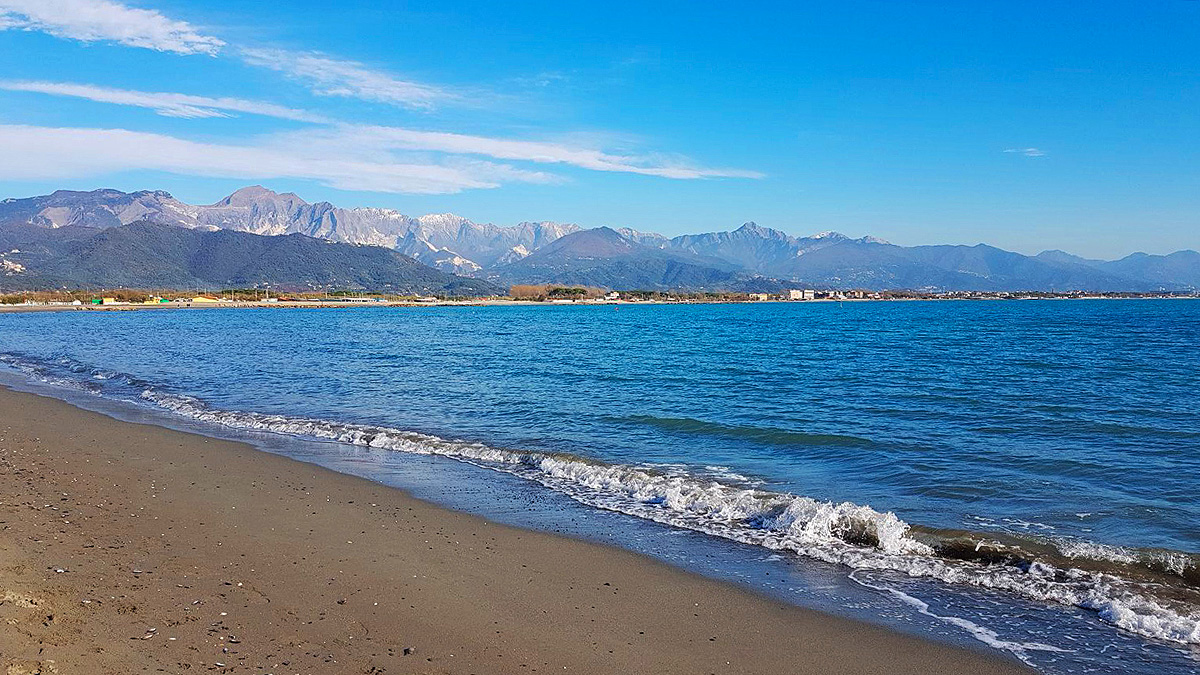 Versilia is the part of north-western Tuscany, within the province of Lucca, including the territories of the towns of Pietrasanta, Forte dei Marmi, Seravezza, Stazzema and it extends between the slopes of the Apuan Alps and the San Rossore Park. This area has a strong tourist vocation with an extensive sandy coastline and it is considered a real symbol of refined social life.
Among the most popular villages we recommend Forte dei Marmi, with its most fashionable weekly market in Italy, Pietrasanta, the artistic capital of Versilia, Camaiore, with its characteristic historical center with Romanesque architecture and famous for wrought iron craftsmanship and Viareggio, with worldly cafés, young and trendy night clubs and with a lot of Art Nouveau architectural beauties.

The Aquarium of Genoa (in Italian: Acquario di Genova) is the largest aquarium in Italy and the second largest in Europe.
Located in the old harbor area of Genoa, Italy, the aquarium welcomes more than 1.2 million visitors each year.
The building, which some say looks like a ship ready to head out to sea, was designed by the Genoese architect Renzo Piano of the Renzo Piano Building Workshop

Cities to visit in Tuscany

Florence was a centre of medieval European trade and finance and one of the wealthiest cities of that era. It is considered the birthplace of the Renaissance, and has been called 'the Athens of the Middle Ages'. The Florentine dialect forms the base of Standard Italian and it became the language of culture throughout Italy due to the prestige of the masterpieces by Dante Alighieri, Petrarch, Giovanni Boccaccio, Niccolò Machiavelli and Francesco Guicciardini.The city attracts millions of tourists each year, and the Historic Centre of Florence was declared a World Heritage Site by UNESCO in 1982. The city is noted for its culture, Renaissance art and architecture and monuments. The city also contains numerous museums and art galleries, such as the Uffizi Gallery and the Palazzo Pitti, and still exerts an influence in the fields of art, culture and politics. Due to Florence's artistic and architectural heritage, it has been ranked by Forbes as one of the most beautiful cities in the world.LuccaFounded by the Etruscans, Lucca is a city and comune in Tuscany, Central Italy, on the Serchio, famous for its intact Renaissance-era city walls.PisaIs a city in the Tuscany region of Central Italy straddling the Arno just before it empties into the Ligurian Sea. Although Pisa is known worldwide for its leaning tower (the bell tower of the city's cathedral), the city contains more than 20 other historic churches, several medieval palaces and various bridges across the Arno. Much of the city's architecture was financed from its history as one of the Italian maritime republics.The city is also home of the University of Pisa, which has a history going back to the 12th century and also has the Scuola Normale Superiore di Pisa, founded by Napoleon in 1810, and its offshoot, the Sant'Anna School of Advanced Studies as the best sanctioned Superior Graduate Schools in Italy.SienaThe historic centre of Siena has been declared by UNESCO a World Heritage Site. It is one of the nation's most visited tourist attractions, with over 163,000 international arrivals in 2008. Siena is famous for its cuisine, art, museums, medieval cityscape and the Palio, a horse race held twice a year.